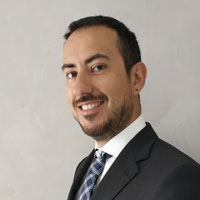 Stefano Cresci has been selected from among 13 excellent short-listed nominees as the winner of the 2020 ERCIM Cor Baayen Award. Stefano, from CNR, Italy, has received the award in recognition of the outstanding scientific quality of his research and the impact on science and society that he has already achieved as a young researcher.

Stefano Cresci is currently employed at the Institute of Informatics and Telematics at the National Italian Research Council (IIT-CNR). He obtained his PhD with honours in 2018 from University of Pisa, Italy, publishing a thesis titled “Harnessing the Social Sensing revolution: Challenges and Opportunities”. His timely and societally relevant research focuses on the study of online social networks, with the twofold goal of evaluating their potential to improve society, and their pitfalls. As part of his research, he studied how to collect, filter, and analyse real-time online data streams to improve situational awareness in the aftermath of natural and human-made disasters, for example earthquakes, riots or terrorist attacks. Stefano has also been investigating the challenges related to the use of online social network data, pioneering studies on online deception and on the manipulation of online information. Since 2013, he has been studying problems such as the automatic detection of automated and malicious online accounts – for example, the detection of social bots and trolls, and the spread of false and misleading information, like fake news detection.

His research is highly interdisciplinary, lying at the conjunction of systems and information security, AI and data science, web and social media. In his research he adopts and develops web crawling and scraping techniques, big data analytics, as well as novel data science and AI techniques, making several widely-acclaimed contributions to these areas of research.

He has published over 50 papers, including publications in highly prestigious journals and conferences in the fields of web analytics and security. These contributions have amassed more than 1,500 citations on Google Scholar, with a high h-index (which measures the impact of a particular scientist).

Stefano is an active and recognised member of the research community. During and after his PhD, he was invited to visit renowned international institutions such as the Hamad Bin Khalifa University in Doha (Qatar) and the Nokia Bell Labs in Paris (France), where he spent several months researching solutions to threats to information credibility. Stefano regularly organises and chairs workshops and special issues at important conferences and journals. He has also held a number of presentations and keynotes at international venues. He holds editorial roles for several journals, and reviews for major conferences and journals in his scientific fields, including Nature Communications. Over the years, he has been involved in many national and European research projects.

In acknowledgment of his notable scientific contributions and the impact of his research, Stefano has already received several prizes. His PhD thesis was awarded the 2018 PhD thesis Award by the Italian Section of the IEEE Computer Society. In 2018 he received a SAGE Ocean Concept Grant in recognition of his contributions to social and political scientists as well as to data journalists. In 2019 Stefano received the IEEE Next-Generation Data Scientist Award in Washington, DC – awarded for exceptional early-career achievements in data science. Recently, he was selected by senior ACM members as one of the most promising young researchers in computer science and was invited to participate in the 8th Heidelberg Laureate Forum, meeting the recipients of the most prestigious awards in computer science and mathematics.

In addition to the scientific value of Stefano´s research, it is important to underline its societal impact. The Italian State Police, Europol, and the European Monitoring Centre for Drugs and Drug Addiction (EMCDDA) are using some of his algorithms and tools. The Italian National Institute of Geophysics and Volcanology uses the social media emergency management tools developed by Stefano.