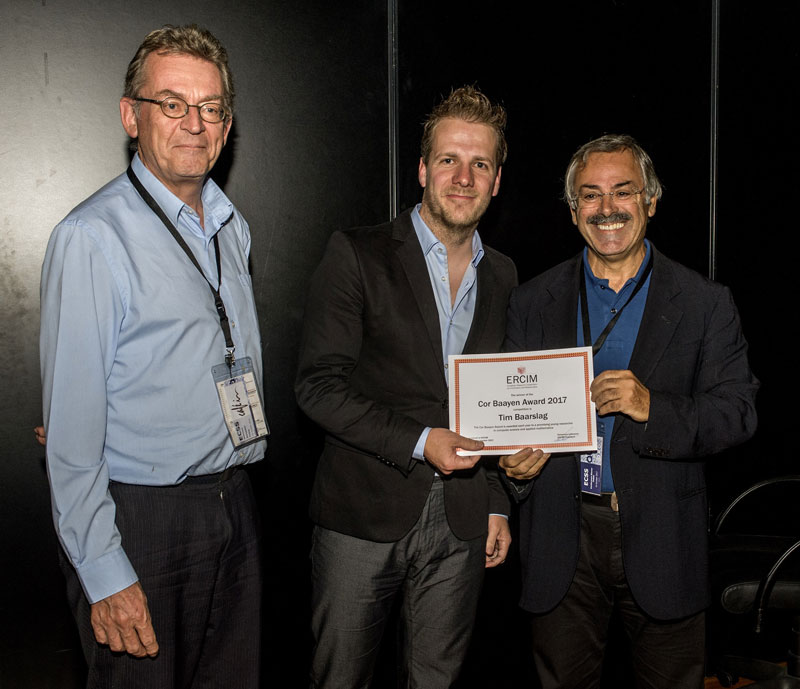 Tim Baarslag from CWI was selected as the winner of the 2017 ERCIM Cor Baayen Award, in a very tough competition with 15 finalists. The award committee recognises Tim’s skills and the results that he has achieved. His enthusiasm for internationally oriented research cooperation, his talent for recognising the potential use of mathematical tools, and his cooperative skills make him a young researcher of outstanding quality.

Tim has obtained some very impressive scientific results. His PhD dissertation was awarded cum laude, which is conferred to less than 5% of doctoral candidates at the Delft University of Technology. His dissertation won the 2014 Victor Lesser Distinguished Dissertation Runner-up Award in recognition of an exceptional and highly impressive dissertation in the area of autonomous agents and multiagent systems. He was shortlisted for the 2014 Artificial Intelligence Dissertation Award, which recognises the best doctoral dissertations in the general area of artificial intelligence. His dissertation is also published by the Springer Theses "the best of the best" series, which recognises outstanding PhD research by selecting the very best PhD theses from around the world for their scientific excellence and high impact on research.

Tim has made a real scientific impact with his work since embarking on his PhD in 2010. He has already published over 40 articles, in collaboration with 35 researchers from 17 international institutes and five industrial partners. His research is published in the highest ranking publications in his field, including the top journal Artificial Intelligence and top conferences such as IJCAI, ECAI, AAAI and AAMAS. His research on how artificial intelligence can help negotiate better deals for humans was recently featured in Science. His achievements point to great promise for his future work and for others who build on it.

Since 2016, Tim Baarslag has been working as a researcher at CWI, where he studies negotiation strategies for smart energy cooperatives. He collaborates closely with key smart grid stakeholders to develop his negotiation results into user-adaptable energy trading technology. His negotiation algorithms support energy trading in a sustainable energy community ‘Schoonschip’ in Amsterdam as part of the ERA-Net Grid-Friends project. He has recently received a personal 'Veni' grant for young, talented researchers from The Netherlands Organisation for Scientific Research (NWO).

As the lead developer of the negotiation environment “Genius”, he contributed to an international platform for research on automated negotiation agents, which is downloaded more than 100 times a week and is used by more than 20 research institutes all over the world, including Harvard University and Massachusetts Institute of Technology (MIT). Additionally, he is part of the organising team of the International Automated Negotiating Agent Competition (ANAC), which has had more than 100 international participants and is held in conjunction with the leading artificial and multi-agent conferences in his field (AAMAS and IJCAI). Not only have his results and the competition provided a state-of-the-art repository of automated negotiators, they also continue to steer the automated negotiation research agenda.

Tim’s work provides a unique blend of mathematically optimal results and application-driven research with a strong potential for knowledge utilisation. In collaboration with MIT CSAIL and the University of Southampton, he has developed new mathematical models that enable essential next steps for conducting privacy negotiations feasibly. Furthermore, together with multiple UK partners including The Open University, Tim helps to design Internet of Things solutions that enable negotiable data access for future data marketplaces. His research has influenced the negotiation architecture that will be used to assess and mitigate privacy trade-offs in existing Internet of Things applications and platforms.

Tim is also actively engaged in the broader computing community and highly involved with the most eminent researchers within computer science and mathematics. In 2016, he was selected as one of 200 highly talented, preeminent young researchers in mathematics and computer scientists from over 50 countries for the Heidelberg Laureate Forum scholarship. In 2017, he was selected from over 300 applicants as an outstanding early career individual in the field of computing to take part in the ACM Future of Computing Academy and attend the 2017 Turing Award ceremony, in an effort to support and foster the next generation of computing professionals.